While many of us have grieved over the loss of a beloved pet, few of us have turned our sadness into a tribute, let alone a tribute that’s become the world’s most famous tale about a ship’s cat.

Matthew Flinders did. While the manuscript for A Biographical Tribute to the Memory of Trim found among his papers is dated 1809, he was clearly rehearsing this story in his heart and head for some time as there were at least two earlier drafts in English and French. ‘Translating into French the history of my cat Trim, which I wrote out for the purpose,’ he notes in his Private Journal on Sunday 11 January 1807. He begins:

I can never speak of cats without a sentiment of regret for my poor Trim, the favourite of all our ship’s company on the Spyall. This good-natured purring animal was born on board His Majesty’s ship the Roundabout … The signs of superior intelligence which marked his infancy, procured for him an education beyond what is usually bestowed upon the individuals of his tribe; and being brought up amongst sailors, his manners acquired a peculiarity of cast which rendered them as different from those of other cats, as the actions of a fearless seaman are from those of a lounging, shame-faced ploughboy. 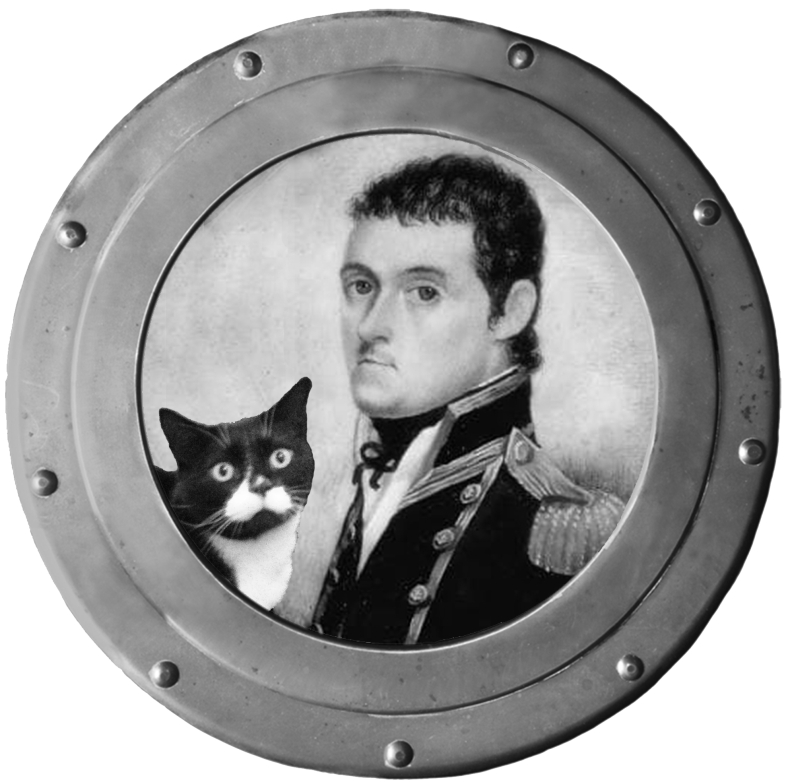 While there are a number of stories about ships’ cats, Trim’s tale is unique in two ways. First, as far as we know, it is the first full “biography” of a ship’s cat. It’s about 5000 words long and begins with his birth on board HMS Reliance (renamed Roundabout in the light-hearted Tribute), and ends with his disappearance on Mauritius in 1804.

Second, there are now memorials to Flinders and Trim in Australia, Britain and Mauritius. Not many ships’ cats have one memorial; Trim has at least six. The first one, by John Cornwell, was erected in 1996 on a window sill of the State Library of New South Wales, behind the 1925 state of Matthew. There is a monument to both Flinders and Trim in Flinders’ birthplace, Donington, Lincolnshire, and another at Baie du Cap in Mauritius, where they first landed on that fateful day in December 1803. Trim is also the subject of several novels and children’s books: his fame has spread well beyond the confines of his devoted master’s tribute.

The most recent major statue of Trim and Matthew is in the concourse outside Euston Station in London, not far from St James’s Churchyard, where Matthew was buried (and his body recently discovered in the excavations for the HS2). The statue was designed and created by Mark Richards for an international committee determined to erect a permanent memorial in the city where Matthew spent his last few years. Prince William unveiled the statue on the bicentenary of his death, 19 July 2014. Three statues were cast. The other two have been erected in South Australia at Port Lincoln’s Flinders Centre and at Flinders University’s Tonsley campus.

The manuscript, a six-page foolscap booklet in Matthew Flinders’ beautiful handwriting, survived among his papers and is safely lodged in the National Maritime Museum at Greenwich, where it was rediscovered in 1971 by Australian writer and editor Stephen Murray-Smith. It has been published several times since then in journals, as books and online. For our new edition, Trim, The Cartographer’s Cat (Adlard Coles, 2019) we went back to Flinders’ manuscript and made a complete and faithful new transcript, correcting the many little errors we have found in the various online and print editions, and restoring the cuts that some editors had made.

Ships have had cats for pest control for hundreds, possibly thousands of years. They were even written into the shipping rules published in Barcelona in 1494 – Les costums marítimes de Barcelona universalment conegudes per libre del Consolat de mar. They were insurance.

“NOTE LVIII If goods laden on board of a ship are devoured by rats, and the owners consequently suffer considerable damage, the master must repair the injury sustained by the owners, for he is considered in fault. But if the master kept cats on board, he is excused from that liability.” [A MANUAL OF MARITIME LAW CONSISTING OF A TREATISE ON SHIPS AND FREIGHT AND A TREATISE ON INSURANCE. TRANSLATED FROM THE LATIN OF ROCCUS WITH NOTES BY JOSEPH REED INGERSOLL (1809)]

However, the first stories about ships’ cats aren’t about catching rats. They are about being rescued – which suggests that once on board they became beloved companion animals.

‘It chanced by fortune that the shippes Cat lept into the Sea, which being downe, kept her selfe very valiantly above water, notwithstanding the great waves, still swimming, the which the master knowing, he caused the Skiffe with halfe a dozen men to goe towards her and fetch her againe, when she was almost halfe a mile from the shippe, and all this while the ship lay on staies. I hardly believe they would have made such haste and meanes if one of the company had bene in the like perill. They made the more haste because it was the patrons cat. This I have written onely to note the estimation that cats are in, among the Italians, for generally they esteeme their cattes, as in England we esteeme a good Spaniell.’ THE VOYAGE OF M. JOHN LOCKE TO JERUSALEM, THE PRINCIPAL NAVIGATIONS, VOYAGES, TRAFFIQUES AND DISCOVERIES OF THE ENGLISH NATION COLLECTED BY RICHARD HAKLUYT, 1598–1600

And a similar story appears in Fielding’s The Journal of a Voyage to Lisbon (1755), this time about the master’s cat.

Flinders tells us that Trim was a ‘favourite with everybody on board, both officers and seamen’. They fed him and played with him. They cooperated in his ‘experiments upon projectile forces and the power of gravity.’ They carried him down from the topmast after he had run up to supervise ‘taking in a reef’ – easier for a cat to climb up than down! And ‘having never received anything but good from men, he believed all to be his friends, and he was the friend of all.’ But he was more particularly the friend of Flinders: as he wrote to his wife Ann from Sydney in June 1803, Trim was ‘at present fat and frisky: … he is commonly my bedfellow’.

Trim was shipwrecked with the Flinders and their shipmates in August 1803, and he stayed on the nearby Wreck Reef Bank while Flinders set off in a small boat to fetch help from Sydney, more than 700 miles away. Trim ‘passed there two long and dreary months; during which his zeal in the provision tent was not less than it had been in the bread room, and his manner preserved all their amiability.’ Flinders goes on:

When vessels arrived to our assistance, Trim preferred following his master on board the Minikin schooner, to going with the rest of the ship’s company to China in a large vessel, giving thereby a memorable example of faithful attachment.

The misfortunes continued: Flinders, Trim and rest of the crew of the Minikin [or Cumberland] were taken prisoner by the French governor on Mauritius. ‘Trim was confined in a room with his master and another officer, and as he possessed more philosophy than we did, he contributed by his gay humour to soften our strait captivity.’

When after a few months the prisoners were moved to different accommodation, with a garden and a little more freedom to move around, Flinders sent Trim to live with ‘a French lady’ as ‘a companion for her little daughter’, fearing that otherwise he might escape or come to harm. But he disappeared, never to be found again. Flinders suspected the worst – that he might have ended up in a cooking pot. We like to think he was more resourceful than that, and that he might have taken the opportunity to go exploring.

Flinders was devastated at losing his ‘most affectionate of friends, faithful of servant, and best of creatures.’ He first wrote ‘the story of my cat Trim’ two and a half years later, in January 1807, and the manuscript we have is dated 1809. ‘Many a time have I beheld his little merriments with delight, and his superior intelligence with surprise: Never will his like be seen again!’, he exclaimed.

Flinders was a loyal friend to many, but the Biographical Tribute exceeds in length and warmth anything that he wrote about his other shipmates put together, despite the fact that they might have been almost as important to the success of the voyage as Trim. He valued Trim as a pest controller, but he loved him as a companion throughout the eventful and challenging years of his active career and the dark days of his imprisonment, and he mourned his loss as that of a beloved friend.

One thought on “Trim the Ship’s Cat”

Find all the latest news from the team behind Pets and Family Life in England and Wales 1837-1939, right here!